Several trademark fees have increased starting January 2nd. The most notable fee increases are:
(1) TEAS standard filing fee is increased from $275 to $350,
(2) Combined §8 and §15 declarations from $325 to $425 per class, and
(3) Combined §8 declaration and §9 renewals from $425 to $525 per class.
The current USPTO trademark fee schedule can be found in the following link: https://www.uspto.gov/learning-and-resources/fees-and-payment/uspto-fee-schedule#Trademark%20Fees.

While China is becoming an increasingly attractive patent filing destination for foreign companies, foreign counsels are often confused by the country’s inventive step requirement. Indeed, Chinese patent examiners often use abstract legal terms, such as “prominent substantive features” and “notable progress,” in their inventive step analysis. This article provides an overview of the inventive step requirement in China, in comparison with the non-obviousness standard in the United States. Read the article in IPWatchdog.

False marking (as distinguished from false marketing) occurs when a product is falsely labeled as falling within the scope of an enforceable patent.  False marking likely occurs in three ways: (1) there is no patent, just a patent application; (2) the listed patent has lapsed or expired; or (3) the product falls outside the scope of the patent claims.

The statutory penalty for false marking is $500 per INSTANCE.  In theory that means a company selling 10,000 falsely marked units could be liable for a $5,000,000 penalty!  When the statute was first passed, law firms saw this as a lucrative opportunity, and started filing lawsuits left and right.  Their behavior was so egregious that Congress quickly changed the law to limit the penalty to “recovery of damages adequate to compensate for the injury”.   In normal English, this just means that a plaintiff must prove “actual damages”, something that is very difficult to do with respect to false marking.  For example, let’s say a competitor falsely marked its chairs with the number of an expired patent, and Bob avoids selling similar chairs because he is concerned about infringing the listed patent.  Damages would be extremely difficult to prove because Bob could have readily gone to www.PublicPAIR to discover that the patent was no longer in force.

Have you ever wanted to get federal copyright protection on a whole group of your best hot-take tweets? Well, now you can! The U.S. Copyright Office has created a new option for authors to register up to 50 ‘short online literary works’, ranging from 50 to 17,500 words per work. As some initial requirements, the works must have all been written by the same author(s), and only text-based works are eligible. In addition, the works must have been published first online and within a given three-month period.

Emails, podcasts, audiobooks and computer programs are not eligible, even if they meet the other criteria.

So who is this for? The Copyright office create this option in response to a petition by several writers associations, and the GTRX option is meant to help bloggers and social media posters. The filing fee of $65 (covering up to 50 works) incentivizes online authors who generate continuous new content to secure copyright coverage early and often.

You can check out the Copyright Office’s FAQ on the subject here and Circular 67 Group Registration of Short Online Literary Works.

Can an AI machine be an inventor?

Wow, fascinating issue, this one.  For now the short answer is a simple “no”, and several patent offices across the globe have already ruled that AI machines cannot be regarded as inventors. See e.g., article by the Chinese law firm, Liu Shen.

However, as AI machines become ever more powerful, the issue is bound to come up again and again.  One sign that the issue is still alive is that the U.S. Patent and Trademark Office is apparently trying to resolve several thorny issues related to AI inventors, including the following:

(1) What constitutes an AI invention.  Is it the AI database?  The algorithm?  How the AI is trained?

(3) What about that PHOSITA? With that hypothetical person include only humans?  Or would it potentially include other AI machines, or other instances of the same AI machine?

(4) What about ownership and assignment?  If an AI machine has patent rights, are those rights automatically transferred to a person or company owning the AI?  What if the AI is public domain?  Do the patent rights go to whomever trained or used the AI?  What if a person simply installed the AI on his/her computer, and that AI machine invented something without any direction at all?

(5) What about disclosure of prior art?  Current patent law requires that an inventor disclose to the patent office all information that the inventor possesses, that a reasonable examiner would want to know about, and that is not cumulative. Depending on the AI algorithm it might be impossible for an AI machine to determine what information it used to derive the invention.

At Fish IP, we don’t see the issue going away anytime soon.  What happens, for example, when electronic or bio-neural processors are embedded in brain tissue?  Did an invention arise from the embedded processor, or the human part of the brain?  And what if the invention arose because the electronic or bio-neural processor was communicating with others, in a sort of hive as contemplated by US patents 9,501,573 and 10,055,771?  Time to fasten your seat belt! 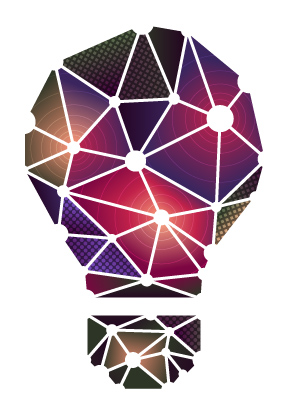 We have some new Patent Beast Comics up. This short series is a riff on how clients might be assigned to the right attorney for them based on how they respond to the CoronaVirus through their choice of masks. Fans of the Harry Potter series will recognize the sorting hat and the respective colors that the clients are wearing linking them with a certain House at Hogwarts.

The full series can be found on the PatentBeast.com site.

Although the length of time that PTAB appeals are pending has only gone down slightly over the last three years, the number of new appeals has steadily declined.  This seems to be the case for both inter-partes and ex-parte appeals.

It’s not clear why that has happened.  One theory is that the relatively lower cost of IPRs and other appeals has made patent holders more likely to settle with a potential competitor – to avoid a relatively high chance of the patent rights being voided. 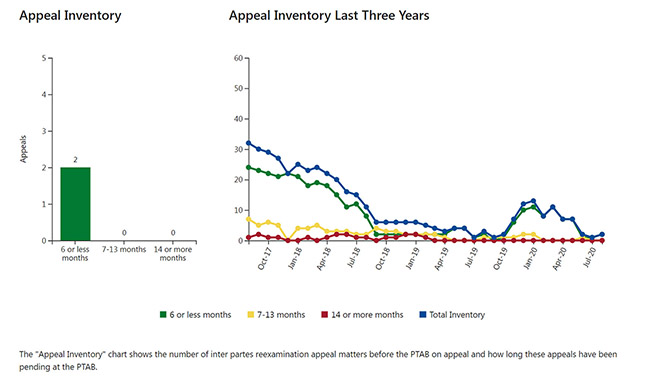 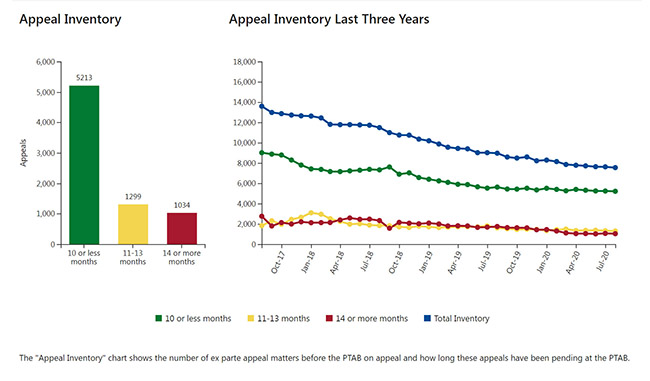